THE REAL HOUSEWIVES OF CHESHIRE ARE CRUISING ONTO SCREENS NEXT MONTH JOINED BY GUEST HOUSEWIVES TANYA BARDSLEY & ESTER DEE.

The Real Housewives of Cheshire: Christmas Cruising is set to launch on ITVBe and ITV Hub on Monday 5th December

The Housewives are squeezing in one last fabulous girls’ trip before Christmas, taking to the seas to cruise around Mexico in luxurious style. Guest Housewives Tanya Bardsley and Ester Dee make a surprise return as they travel from port to port in search of sun, sea and fun.

This series Rachel has big news to celebrate, a storm is brewing between Hanna and Seema, and will Tanya and Ester be welcomed back with open arms? It’s all hands on deck!

In 2015, Tanya Bardsley burst onto our screens as one of the original cast members of The Real Housewives of Cheshire. She last featured on the hit reality TV show in 2021, Series 14. Ester Dee had been on the show since 2016 until her last guest appearance in 2021, Series 13.

Will the holiday be plain sailing, or will there be trouble at sea? Set sail and cruise with The Real Housewives of Cheshire from 5th December; it’s bound to be a wild ride!

The 3×60’ series is produced by Monkey, which is part of Universal International Studios, a division of Universal Studio Group. David Granger and Natasha Bardusco are Executive Producers for Monkey.

The Real Housewives of Cheshire: Christmas Cruising, Mondays from 5th December at 9pm on ITVBe and the ITV Hub 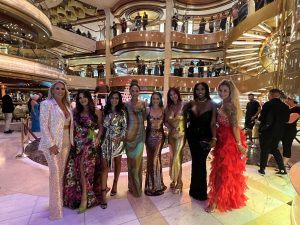